Arsene Wenger held his usual Thursday afternoon press conference yesterday and revealed all about the state of the squad for the coming weekend and beyond.

In short, Nicklas Bendtner and Kieran Gibbs will be back in the squad; Theo Walcott is an outside chance to be involved and is looking sharp; Manuel Almunia is out for a few more days; Cesc Fabregas is short and will probably be saved for Manchester City; Thomas Vermaelen and Bacary Sagna are out for at least ten days; while Robin van Persie will not return until next month.

I must say I am surprised about the continued absence of Fabregas and Vermaelen – I had expected both to feature against Birmingham – while the news of van Persie’s extended absenteeism is extremely disappointing. Just what is wrong with this man?

While it is no doubt an exhausting list of casualties to trawl through but the important thing to note is that we are leaving the international break in significantly better shape than we started it. 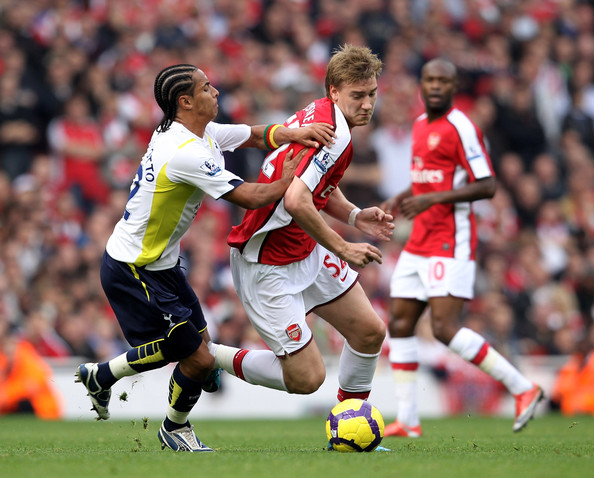 Bendtner has not been free of injury since October 2009

The manager’s comments that he believe we will finally see Bendtner play to his full capacity after his niggling groin problems are most welcome. Since putting in a storming opening half-hour before going off injured with a troubled groin in our 3-0 win over Spurs back in October 2009, Bendtner has been unable to put a serious run of games together and stamp his authority on the starting team. With Marouane Chamakh being solely depended on to lead the line in the opening stages of the season the return of Bendtner will be an important one.

It is also good to see Gibbs back in contention. The young Englishman has starred in the games he has started this season, culminating in a Man of the Match performance against Spurs in the Carling Cup, and his return will put some welcome pressure on Gael Clichy at left-back. Upon hearing the news of Gibbs’ foot problem I voiced my disappointment that his push for a starting berth had been dealt another setback, but hopefully the Englishman can get back to his best soon and give Wenger something to think about.

Despite the return of Bendtner and Gibbs the starting line-up is likely to be quite predictable.

Lukasz Fabianski should start in goals behind a back four of Emmanuel Eboue, Sebastien Squillaci, Laurent Koscielny and Gael Clichy. In midfield Alex Song will be fresh after being rested by Cameroon and is likely to be supported by two of Abou Diaby, Jack Wilshere and Denilson. Up front Chamakh should start, supported by Andrey Arshavin on the left (if he is deemed sharp enough after two games with Russia) and Tomas Rosicky or Samir Nasri on the right.

It’s brilliant to have the real football back again after what was a fairly tame international break. Our boys have a job to do to bounce back from losing their last two games but at home, at The Emirates, you have to fancy them to do it.

Have your say on Arsenal v Birmingham by leaving a comment.