Spurs 1-4 Arsenal (a.e.t.): Unique Nasri gets the goals, Gibbs and Wilshere the plaudits

It would be easy to get caught up in the emotion of last night’s stunning 4-1 extra-time victory at White Hart Lane. But that would do a great disservice to an Arsenal team that put in a masterclass in technical football to ensure that the ineptness of the officiating did not deny them a convincing win.

It was a much stronger Carling Cup side than usual, as evidenced by the front three of Samir Nasri, Carlos Vela and Tomas Rosicky and Laurent Koscielny’s presence in central defence, but the effort, desire and technical quality of the football on display was something to behold. Driven on by sensational performances by Kieran Gibbs and Jack Wilshere and an early debut Arsenal goal by Henri Lansbury, our boys gave Tottenham a first-half schooling at White Hart Lane.

After a fiesty opening five minutes our superior energy and effort began to show. Wilshere and Denilson took control of the midfield area, paving the way for a couple of Lansbury sighters before the opening goal came. And when it came, what a goal it was.

Emmanuel Eboue’s beautiful crossfield ball was brought down by Gibbs who drove forward and flicked the ball onto Rosicky. The Czech man then tapped the ball into space for Wilshere who hammered in a low, inch-perfect cross that Lansbury finished off in true Freddie Ljungberg style.

Arsene Wenger is often incorrectly criticised for failing to give English players a fair go. He would have enjoyed this goal more than anyone even if he had to watch it from the stands while serving his one-match touchline ban for poor conduct against Sunderland. Wenger’s constant text-messaging to Pat Rice from the stands provided some of the more comical moments in this match, enhanced by the post-match revelation that his phone reception essentially carked it.

The goal only served as more incentive for our boys to attack while Spurs went well and truly into their shells. Indeed, the movement and intensity both on and off the ball by Arsenal was quite simply amazing and the quality of our passing ensured we saw a huge amount of the ball and minimised Tottenham’s ability to impact on the scoresheet. When football tacticians talk about “defending by keeping the ball” this is exactly what they are referring to, as evidenced by Spurs inability to create anything going forward.

Despite bossing possession in the first half we created very few clear-cut chances, although the one we did create just before the break should have resulted in a goal. Wilshere’s delightful through-ball rewarded a blistering Gibbs run but after rounding the goalkeeper and preparing to slide the ball into the empty net, the full-back was incorrectly ruled offside. It was one of the more frustrating offside decisions to go against Arsenal in recent seasons, denying the two Englishman the honour of scoring a brilliantly-worked goal. It left me with a feeling of inevitability quite similar to Rosicky’s weekend penalty miss: surely Tottenham would get back into the game now, wouldn’t they? 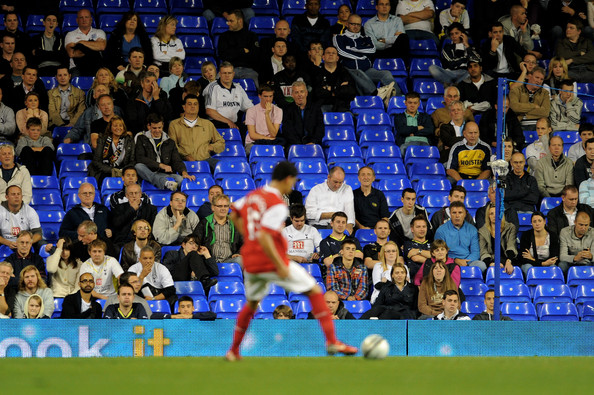 That the answer to the question was ‘yes’ was hardly surprising, the manner of the goal was extremely frustrating. Probably under half-time instruction from the match referee to give the benefit of the doubt to the attacker after the Gibbs blunder, the linesman then contrived to make things worse by giving Robbie Keane way too much benefit and allowing the Spurs substitute to score.

Lukasz Fabianski also had an important role to play in the goal and I think his effort summed up everything that is good and bad about him at the moment. He showed excellent reflexes to get down to the shot but a lack of strength in his wrists to keep the ball out. I’m not sure there are many goalkeepers out there who would have reacted quickly enough to get a hand on it but once he was there, Fabianski really should have kept it out. Any goalkeepers out there that give their opinion on this?

Once Spurs were level things the contest became much more even. Yet while the home side enjoyed more of the ball than in the first half it was still our boys who created the best opportunities. Vela wasted his only decent chance by heading over from a Wilshere cross while Keane was again incorrectly ruled onside before striking the post. Marouane Chamakh and Andrey Arshavin replaced Vela and Rosicky in what was an exciting second-half, yet 1-1 it ended and extra-time beckoned.

The extra 30 minutes got off to an explosive start as Arshavin’s clever dink put through Nasri and the Frenchman was pulled down in the area by Sebastien Bassong. With Rosicky sitting on the substitutes bench Nasri took the kick himself, sending goalkeeper Pletikosa the wrong way to put Arsenal back in front.

Then, just two minutes later, a repeat. Chamakh broke free into the box, was pulled down and a second penalty was awarded. Nasri stepped up again to slide the ball into the opposite corner and effectively end the game as a contest.

When Arshavin added a blasted fourth after being put through by Wilshere, you just knew that every Arsenal fan wanted to make it five to get revenge for two seasons ago. Alas, it wasn’t to be as the referee blew the final whistle. But while the boys were unable to repeat Spurs 5-1 scoreline they were treated to marvelous sight of the White Hart Lane crowd emptying fifteen minutes before the end of the game, a result of Arsenal’s dominance on the pitch.

So all in all, it was a sensational victory by the boys with many, many things to be happy about.

Wilshere ran the show today, reacting to being kicked all over the place by the Spurs midfield and defence by playing better and better as the game went on. He was ably supported by Denilson, whose intelligent positioning paved the way for Wilshere’s probing, but the Englishman’s effervescence and technical quality contributed to a performance that no other 18-year-old in the Premier League is capable of right now.

Yet while Wilshere’s performance was undoubtedly brilliant he wasn’t the best player on pitch. That honour goes to Kieran Gibbs who looks absolutely in the zone at the moment. He defended superbly, picked his moments to get forward and should have had a goal to go with his near-perfect performance. That Gibbs went off injured with another potential metatarsal break is a massive disappointment because in this form he deserves a shot at the first-team.

The bizarre performance of the night went to Nasri, who fused blatant arrogance with the ice-cool temperament necessary to win the game. Despite plenty of praise from other reports, I felt the Frenchman’s efforts over the first 90 minutes were extremely poor. Unlike every other member of the starting team I thought he looked off the pace, slowing the game down when in possession and getting caught with the ball a few too many times. He also sent Rosicky away from a corner kick in a very “I’m the man” way but took the responsibility for the two kicks superbly, watching the goalkeeper and sending him the wrong way both times.

I’ve said before that Nasri’s unique temperament – a product of the rough and tumble nature of his Marseille childhood – makes him a unique player, both a fighter and a leader with a dash of arrogance thrown in. For better and for worse, I think we saw that tonight.

Other brief mentions should go to Johan Djourou, who was certainly a little rusty but completed a solid 90 minutes in his first start in 16 months, and Vela, whose tireless performance would have drawn much praise if he was three inches taller and had a lizard-style haircut.

Beating Spurs is always a delightful thing but I just felt tonight was a little special. We overcame some horrible refereeing to get the win that our storming performance deserved at White Hart Lane and bounced back from the disappointment at Sunderland in style. The energy and effort of a virtual second-string line-up indicates the depth and quality that we have at our disposal all over the pitch and in Wilshere, Gibbs and Lansbury we have three young Englishman who are starting to show they have the ability to make the grade at the club.

Have your say on Arsenal’s 4-1 win over Spurs by leaving a comment.