To pick up right where I left off yesterday, I have to admit I spent most of Monday night checking and re-checking for news about the extent of Abou Diaby’s ankle injury.

Yet while I did finally find some sort of answer – two or three games out according to Diaby himself – there was something that tweaked my interest in the comments made by Diaby and the manager regarding Paul Robinson’s tackle.

These were Diaby’s full comments on the incident:

“I will miss our first game in the Champions League but to be honest I am lucky to only miss two or three games, I really thought I would be out for a long time. Bolton is a very physical team and to be honest the tackle was a strong one, but it is Premier League football, people are committed, so it is fine for me. I hope the team start the Champions League with a victory, the first game in any competition is always very important.”

While Arsene Wenger made the following comments regarding the physical nature of English football:

“More protection can become boring… I have seen some countries when every little push or shoulder-to-shoulder is a foul and then it becomes boring because they interrupt the game too much. I must say I love the way the English game is played in England and the one restriction has to be full commitment with the intention of going for the ball and only for the ball.”

The thing that strikes me as a little peculiar about these comments is that both Diaby and Wenger appear to be steering clear of complaining about the tackle by Robinson, praising the physical nature of English football and in the process accepting it as part of the game. This is in direct contrast to the sort of comments made after the Ryan Shawcross and Martin Taylor tackles and indicates to me that the PR officer down at Arsenal has implemented a new approach with addressing these sort of concerns in the media. 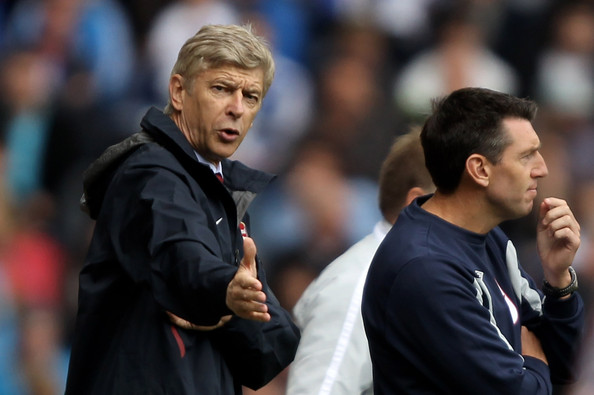 Are Arsene Wenger's "complaining" days over?

Instead of being seen as complainers or a club who “don’t like it up ’em”, this change in approach appears to be specifically designed to remove any unfair focus the English media may be hoping to place on Wenger and the club. Many of the perfectly valid points the manager has been made in the past have been, quite unfairly, used against him as the media turns attention away from the thugs making the tackle and focuses on the “French complainers” trying to remove all contact from the game.

But the above comments give the media no fodder, no grounds for any sort of controversial article and I think that is a change in approach by the club deliberately intended to diminish media focus and erase the false myth that the best way to beat Arsenal is to be physical. Bolton used to use this approach to great effect a few years back but eight wins in eight over Sam Allardyce’s ex-side indicates that physicality against Arsenal simply doesn’t work anymore.

Interestingly Wenger, a true pioneer of the game and man who cannot help speak his heart and mind, added the following comments:

“I love the English game but people are more interested in controversy than protecting the players. Why should I create another story? You asked me how the tackle was and it was bad. But I don’t know if my views are taken seriously. Diaby has been injured from an unfair tackle. I’ve watched it 10 times and it is an unfair tackle. But people just think I’m protecting my players by saying that and that I have a [vested] interest.”

“Don’t get me wrong – sometimes my players commit bad fouls. Yet the beauty of the game is down to the fact that you play with commitment, with passion but also with the right intention. If you have a good sliding tackle where the player takes the ball, it’s as good to see as a player scoring a goal. But when a guy closes his eyes and jumps with anger it’s not right.”

“I’m not enough, alone, to change things. Managers, referees, people who watch games, even journalists have to take responsibility. It’s a matter of respecting the rules. The problem is that, when I say it, it is only considered ‘controversial’ and it is just ‘Wenger, Wenger, Wenger, Wenger’.”

These comments are a little riskier and unfortunately do give the media something to aim at Wenger and Arsenal. Indeed, The Guardian, which features England’s most respected and personable football journalists, ran the story ‘Arsene Wenger condemns tackle on Arsenal’s Abou Diaby by Paul Robinson’.

Despite this, Wenger’s comments give the impression of a man who knows he has done all he can to address this unnecessary part of the game and accepts that it is now not up to him to make the change. Whether he really does accept it or not (and I would suggest strongly that he almost certainly does not) is irrelevant, all that matters is that he paints a picture to the media and the rest of his league that he and his players are not fazed by the physical nature of the Premier League.

It is PR 101 and it is expertly executed.

Have your say on Diaby and Wenger’s comments by leaving a comment of your own.

Tags: abou diaby, arsenal, arsene wenger, Bolton, Paul Robinson
◀ Robinson on Diaby would not be tolerated in Australian sport
Arsenal v Braga preview: I can see Wilshere, Vela and Eboue all getting the nod ▶