AFCB’s newest writer Andrew Luck – the third Andrew on our team! – gives us a fascinating account of Arsenal v Birmingham from a place we would all love to be: in the stands at Emirates Stadium.

My route from the south of the capital, otherwise known as the London Outback on account of the absence of transport infrastructure and the countless feral gangs of disgruntled youths looking for a role (or maybe just a decent team to support), doesn’t really begin to pick up the Arsenal Trail until I reach King’s Cross.  There, as if by magic, countless thousands interchange and head on up the Piccadilly Line towards Ashburton Grove, past the temporarily closed nearest station at Holloway Road.

The resultant compression through Arsenal Tube Station is the predictable outcome, but fans squeeze through in the knowledge we at least have the only tube station named after a football club – our football club – and the warm glow generated by knowing full well this very fact still rankles like a festering wound with our friendly neighbours down the Lane of Pain, leaves everyone feeling very good-humoured. 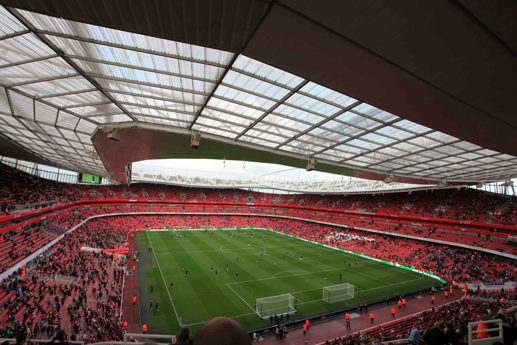 I reach The Clock End, camera in hand, with plenty of time to absorb the pre-match build up.  The mood is uncertain but we know we can’t afford to lose and a draw will only encourage the tiny but vocal groupette of anti-Wengerites.  Trouble is, following recent results against Sunderland, West Brom and Chelsea, do we truly believe we can win?

When I reach my seat, Block 127, Row 14, I’m delighted to see Wenger is planning on doubling our goals tally by taking the imaginative precaution of installing a second goal at the Birmingham end.  No doubt he’ll get criticised for that as well in some quarters but I think this could be a goer and certainly Brum seem to have already worked out their match tactics to counter this, lining up with a remarkable 4-6-0 defensive formation and one which would have surely been rejected at Dunkirk as being unnecessarily negative.

But enough of the nonsense – in the end, as we now know, Arsenal got back to winning ways against a Brummie side that remained as stubbornly bereft of attacking ideas as they were of ambition.  The first half saw a very welcome and much overdue return to form for both Clichy and Diaby; a rare case of an international break doing us favours although one wonders whether the benched presence of Gibbs and a soon-to-be-returning Fabregas had any impact on their respective mind

sets.  Prior to his leg break at Sunderland, Diaby was, for me, one of our brightest prospects.  There were prolonged glimpses of that young player today and whilst he didn’t get a much-deserved goal, he spent most of the afternoon threatening to do so.

McLeish really did appear to line up six in the midfield ahead of a flat back four throughout the afternoon. The most surprising outcome of the afternoon, therefore, was the goal this bizarre line up fashioned against an admittedly static Arsenal defence guilty, for once, of the kind of ball-watching I don’t believe would have been tolerated by either Vermaelen or Koscielny.  Their goal followed a prolonged period of interminable time-wasting by the Bores in Blue and as a way of softening up a defence through the novel tactic of ‘audience disengagement’, it at least made a change from the usual rough-house tactics, broken legs and stretcher-bearers.

As the first half closed and the sun started setting on a match strangely unbalanced at 1-1, the view out the window (below) from my pie-station across the London skyline (look carefully) was superb even by Arsenal’s magnificent standards.

There were rumours before the game that footballing grey matter had in fact been detected inside the skull of ‘referee’ Atkinson whose hopeless sense of timing was the least of his worries.  Those rumours by the start of the 2nd half, had long been killed off, as were the hopes of anyone wishing to see a flowing game of grown up sensible football.  In one unbelievable sequence, having seen Diaby ride two blatant Birmingham fouls and go through on goal following a third, the moron, sorry, Man in Black called back play to book Bowyer for the third incident and allow Birmingham generous opportunity to regroup. Suffice to say, if Atkinson and his mercifully absence apprentice, Stuart Atwell, ever turn up to a ground near you, take my advice and just go home. Even if home is Sydney, Australia.  Seriously.

Brum will probably never get a better opportunity to put a win over Arsenal and though the headlines will be different thanks to Jack’s moment of madness at the end, those same headlines should actually train their fire on a Midlands manager up against an injury weakened Arsenal side, itself riddled with a spine of anxiety comprising a returning Djourou, a nervous Fabianski, an (over) eager to impress Eboue, and, in the Nick of time, an un-match fit Bendtner, finally returning to the fold.

Anxiety on the pitch was matched in the seats every time Song surged forward abandoning his old berth for the glamour and risk of dangerously advanced positions on the pitch.  This he can only be doing with Wenger’s blessing in order to mix up the play to avoid the opposition ganging up on Wilshire – that’s my only explanation and came to me having found a darkened room to lie down in and contemplate the matter at length.  After his sending off, one can only imagine Wenger will in future allow opponents to gang up on Jack, such must be his profound irritation with the gifted little scamp who has, with one fell double-footed swoop, taken the heat off Pulis, Allardyce and co.

Sadly for Wilshire, the headlines will probably be dominated The World’s Worst Referee making virtually his only correct decision of the day with his red card for the young player.  On an Afternoon of Irritation, this all happened towards the end of a lengthy, prolonged and entirely unjustified period of 2nd half injury time in a game of remarkably few injuries and even fewer correct decisions by the appalling official.  Atkinson was booed off at half time for ignoring blatant opposition time-wasting and for being rubbish. You could argue that it was wrong for his assistants to join in the booing but there you go, he was that bad.

The setting sun gave the stadium a gorgeous post-match glow

Both our goals came either side of the break and Nasri’s expertly taken penalty and Chamakh’s awesome presence of mind in taking the ball around the Birmingham defence brought much needed respite from the growing crowd anxiety and it would have surely taken a miracle for Birmingham to have scored a second equalising goal.  The tragedy for them is that had they taken note of Sunderland and West Brom’s approach to their recent games against us they may well have got much more from the game.  In the end, Fabianski was given a no more than a moderate workout and there were few alarm bells beyond the occasional long ball or hustled surge that was by and large dealt with quite robustly.

Our next game, against Donetsk will provide a more conventional challenge to our new found winning ways and aside from Jack’s dismissal, my only real regret on the day was not seeing young Theo hit the grass and I left the stadium, with one of the loudest cheers of the day still ringing round my head.  And this for a player read out as one of the substitutes.

Have your say on Andrew’s report from the stands of Arsenal’s 2-1 win over Birmingham by leaving a comment.